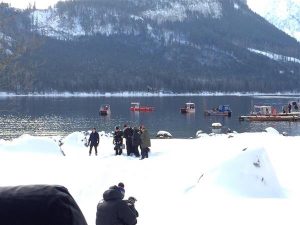 After having prepared the set on the Seewiese as early as 4.30am, cameras started to roll at 7.45am to film Bonds arrival at Mr. White’s hideout – a large hunting lodge which is normally a restaurant.

Bad weather on the previous day had delayed the filming of the scene. For that reason, the film crew used the perfect weather conditions on the morning of 06 January 2015 since actor Daniel Craig was already expected in Sölden the next day.

The security at the left side of Lake Altaussee and on the streets towards it was tight and the press did not have an easy job trying to get some snaps.

If you’re planning a visit, the Jagdhaus Seewiese is open until the end of October each year. Sometimes, they open in the winter if weather conditions permit. Tip: Ask to have a look into the guestbook, Director Sam Mendes signed it during location scouting for ‘SPECTRE’ in October 2014.