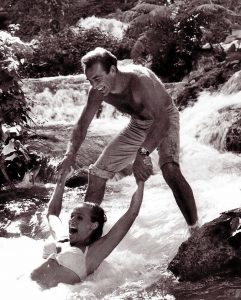 Dunn’s River Falls is one of Jamaica’s national treasures. Globally, it is as well known as Reggae and equally stimulating. There are few places where the Arawak name “Xayamaca” – land of rivers and springs – is more apt. The Spaniards called the area “Las Chorreras” – the waterfalls or springs – and it is truly one of the most beautiful spots on the island.

A stone’s throw from Ocho Rios, one of Jamaica’s fastest growing resort centres, Dunn’s River Falls is unique. Described as a living and growing phenomenon, it continuously regenerates itself from deposits of travertine rock, the result of precipitation of calcium carbonate from the river, as it flows over the falls.

The small dome-shaped cataracts are usually associated with thermal spring activity found in limestone caves. This, combined with its location near to the sea, gives Dunn’s River the distinction of being the only one of its kind in the Caribbean, if not the world.

James Bond Locations brought to you by THE BOND BULLETIN