The Tangier Forbes Museum is located on the Marshan in Tangier and was founded by Malcolm Forbes, who was also the publisher of the Forbes magazine. The museum is situated on a 10-acre piece of land called Palais Mendoub, which creates the perfect surroundings for this unique museum and its armament collection.

The Tangier Forbes Museum remained in the Forbes family name until 1990 when Malcolm Forbes passed away. After their father’s death, the Forbes children decided to sell the property rather than keep it. Today the Forbes Museum is owned by the Moroccan government and is used as a place for visiting dignitaries to stay in. 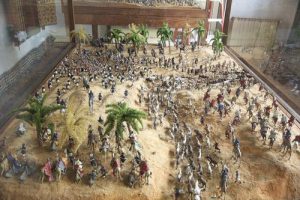 Malcom Forbes, an American billionaire, was recognized as a leading collector of lead soldiers. When Forbes opened the Tangier Forbes Museum he had 115,000 lead models to display in the building. The lead soldiers have been placed in various settings based on major battles that have occurred right through history.

These lead soldiers re-enact battles like Waterloo and Dien Bien Phû in as realistic a manner as possible. Special sound effects and lighting have been added to complete the feel as you look upon these various battles. Some showcases have scenes of complete armies standing on guard, while others depict battle scenes. Outside of the Forbes Museum in the garden, there is a botanic display made up of over 600 statuettes paying respect to the Battle of Three Kings.