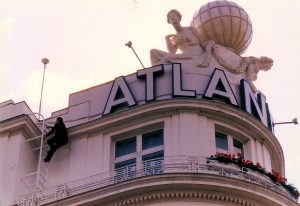 Bond has always stayed in luxury hotels and his 1997 stay in Hamburg was certainly no exception. The producers picked Germany’s best hotel, the Kempinski Hotel Atlantic, as the setting for Bond’s 18th on-screen adventure.

Although the interiors of Bond’s suite had been filmed in the ballroom of Stoke Park Country Club in the UK, the impressive facade of the five star Hamburg hotel proved a nice addition to the scenes set in the hanseatic city.

For the filming, the streets around the hotel were cordoned off and Pierce Brosnan himself climbed up to the roof where two caryatides support a stone globe – a landmark since ages.

Filming in Hamburg concluded with a big party at the Hotel where Brosnan and his family stayed in the Atlantic suite.

James Bond Locations brought to you by THE BOND BULLETIN