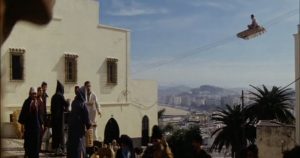 The Kasbah museum, is housed in the former sultan’s palace of Dar el-Makhzen in Tangier. The focus is on the history of the area from prehistoric times to the 19th century.

The building and its surroundings were first used in the 1987 James Bond film ‘THE LIVING DAYLIGHTS’ where Bond jumped along the rooftops while girls from a harem watch in amazement. Bond also watches General Pushkin on Place du Mechoir next to the Kasbah. Furthermore, the deleted scene with the Magic Carpet was filmed at Bab-el-Assa, a street leading up to the Museum.

In 2015, ‘SPECTRE’ used the same setting of Bab-el-Assa for Bond and Madeleine walking towards the fictional Hotel L’Americain. The interior courtyard of the hotel was filmed inside the Kasbah Museum.

Exhibits in the museum are well-presented (information in French and Arabic only). Work your way anticlockwise around the first courtyard before heading inside to the rest of the displays, followed by a walk in the charming Andalucian garden.