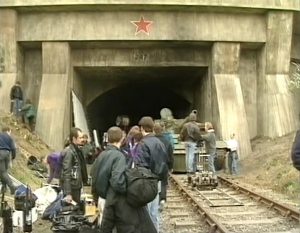 GoldenEye made use of many model and miniature effects. The scene in which Bond confronts Alec Trevelyan’s armoured train from a railway tunnel was a combination of both effects techniques.

The bridge at Mill Lane in Nene Valley was fitted with fake concrete walls to give it a sturdy Russian look, a replica of the T-55 tank was put in place and the crew filmed it shooting at the train. The modified Diesel locomotive was transported via road and placed on the tracks for filming. Each shot had to be carefully planned and prepared.

Other shots, for example the tank slowly moving into position and being rammed by the train, were filmed with the model at Leavesden Studios.

The scenes involving Pierce Brosnan and Izabella Scorupco escaping the large explosion in the scene were also filmed for real at Mill Lane Bridge.